WHEREAS the Free Alabama Movement, Free Virginia Movement, and other revolutionary prison groups around the United States have jointly called for a Nationally Coordinated Prisoner Work Stoppage on September 9th, 2016, and

WHEREAS IWW members in prison and their allies are at the forefront of fighting the prison system from the inside,

MOVED that the GEB endorse the September 9th prisoner work stoppage with the following language:

The General Executive Board of the Industrial Workers of the World endorses the Nationally Coordinated Prisoner Work Stoppage on September 9th, 2016 organized by the Free Alabama Movement, Free Virginia Movement, and other revolutionary prisoner worker organizations and individuals. It is the duty of working class organizations like the IWW to support the struggle of prisoner workers. We call on other unions and revolutionary working class organizations to offer their support and solidarity to this important cause.

The GEB also encourages branches and IWWs to consider planning an action for September 9, to start a local organizing group, and to donate to the efforts at iwoc.noblogs.org/donate.

The Industrial Workers of the World (IWW)

IWW General Headquarters, Chicago, IL. May 12, 2016 Prisoners at Holman Correctional Institution have ended their ten-day shutdown of the State of Alabama’s auto license plate plant. Their work stoppage, initiated on May Day, spread to Elmore, St Clair, Donaldson and Staton facilities over the following week shutting down Alabama Department of Correction’s (ADOC) canning plant, fleet services, and chemical industry as well as the license plate plant. “That was our leverage, that was our power to negotiate with” said Kinetic, a member of both the Industrial Workers of the World (IWW) union and the Free Alabama Movement (FAM). In an interview with media representatives of the IWW-Incarcerated Workers Organizing Committee he explained how the strike achieved one objective but was broken by the unexpected employment of work-release prisoners as strike-breakers.
The strike achieved its first objective after only two days when the Alabama State Legislature killed the $800 million “Prison Transformation Initiative” that would have greatly expanded Alabama’s prison system, which is plagued with overcrowding, violence, deteriorating buildings and budget shortfalls. The defeated law tried to allocate ADOC $800 million to build four 3500 bed super-max facilities. Prisoners initiated their strike to draw national attention to ADOC’s problems and propose other solutions. On May 1st the prisoners stopped reporting to their work stations, and activists organized rallies and solidarity protests according to journalists who interviewed the prisoner’s spokespersons via clandestine cell-phones. On May 3rd, the ADOC’s new prison bill died on the state senate floor. Prisoners contend that their strike tipped the scales against the bill. END_OF_DOCUMENT_TOKEN_TO_BE_REPLACED

The Incarcerated Workers Organizing Committee announces that the Texas prison strikes initiated by IWW members have achieved their desired short-term results and that the first phase of planned long-term strategic strike actions is drawing to an end. The strike actions began on April 4, 2016 and spread to at least a half-dozen locations.

IWW sources within the Texas prison system report that even with lockdowns and other forms of coercion against those who refuse to work as slaves, the strikes have resulted in Texas Department of Criminal Justice authorities now giving more prompt attention to prisoner’s previously ignored grievances. Organizers are now ready to pause and regroup while considering their next move in the struggle for humane treatment. Despite lockdowns and corporate media blackout, an IWW Union member was able to get a strike report outside, stating that “Since this strike action started the prison administration has been much more responsive, and we have had a much easier time getting our grievances addressed.” She shared that the administration just ignored grievance complaints before the strikes began, but now they are addressing them with unprecedented speed. This confirms the power of Union direct action in the form of organization, strikes, and work slow-downs. END_OF_DOCUMENT_TOKEN_TO_BE_REPLACED

TX. Since April 4th, prisoners in at least 4 Texas prisons have been on strike for better conditions and an end to slavery and human rights abuses. This strike is but the latest in a nationwide mass movement inside prisons for dignity and freedom. Minimum wage in Texas prisons is 00/hr. Access to medical care requires a $100 medical copay.

“My son and others are literally sitting down to say – ‘Stop killing us. Stop enslaving us. We are human. This has got to stop’” said Judy, whose son’s prison is on lockdown. “I think the strike should spread. I believe prisoners and families together have the power to collapse this system.”

END_OF_DOCUMENT_TOKEN_TO_BE_REPLACED 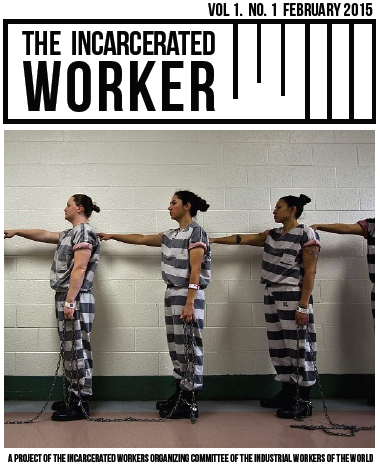 Do you know about the amazing work being done by the IWW’s Incarcerated Workers Organizing Committee?

We’ve grown to having 600 members on the inside around the US, with inside branches being formed, and participation in a whole variety of inside actions from work stoppages to uprisings, and helping create a national call for action and minimum wages (and more) in prison.

We need 100 people to pledge $300 by May 1, and the rest to collectively give $10,000, matched dollar for dollar by a donor, to support our fellow workers on the inside and hiring two ex-incarcerated workers to organize an entire state’s prison system and transform our support network for inside and outside organizers.

Can you help us create a sustainable infrastructure for our members in prison and to transform the IWW in the process?

Reply with questions or contact iwoc@riseup.net. Thanks much for your support or sharing this to those who can–