On Friday night, hundreds of prisoners took over the general population portion of Holman prison in Atmore Alabama. Read more on that and see videos made by the prisoners here.

Viewpoints from the prisoners varied, one described conditions of overcrowding, sending out pictures to accompany it: “114 Boys and Men (from teenagers to senior citizens) are allotted 2ft of personal living space with a 1ft wide locker to keep their belongings. Almost 100 feet of bunks , in 4 lines.” 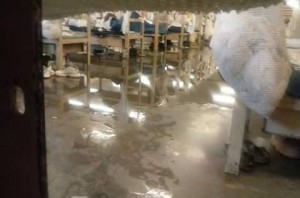 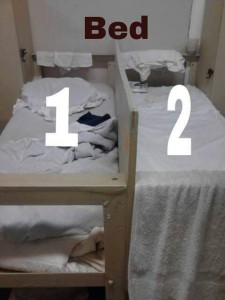 Another prisoner said “It has nothing to do with overcrowding, but with the practice of locking folks up for profit, control and subjugation.” He recounted “Things here are tense but festive. The co and warden was stabbed… Fires were set, people got control of two cubicles, bust windows. The riot team came, shot gas, locked down, searched the dorms. Five have been shipped and two put in lockup.”

According to mainstream media, the Correctional Emergency Response Team had regained control of the facility by 5 am saturday morning. 5 prisoners were emergency transferred and are likely facing harsh reprisals, and new criminal charges.

8:30 the following Monday morning, March 14th, 70 prisoners took over and barricaded themselves into a different portion of the prison. Read the news report on that here. Prisoners smuggled out the below list of demands via contraband cell phone.

Llist of demands written by people at Holman prison in Alabama, the site of two uprisings this weekend.

1. We inmates, at Holman Prison, ask for immediate federal assistance.

2. We ask that the Alabama government release all inmates who have spent excessive time in Holman Prison — due to the conditions of the prison and the overcrowding of these prisons in Alabama.

3. We ask that the 446 laws [Habitual Felony Offender laws] that Alabama holds as of 1975 be abolished.

4. We ask that parole board release all inmates who fit the criteria to be back in society with their families.

6. We also ask for monetary damages for mental pain and physical abuse that inmates have already suffered.

Monday afternoon, 20 more prisoners were transferred out when the second uprising was put down. The riot team will remain on site and in control for 72 hours, and Alabama governor Robert Bently came to visit the prison Tuesday morning. Here is one prisoner’s account of that visit:

Governor Robert Bentley was coming to Holman ( “Da Bottom”) , Someone that could address their Conditions. A Silent Victory in their on going struggle to have their issues addressed-
He got their hopes up- somebody was finally coming to hear their cry.
There was a God…

When he walked into the prison, a sentry of officers went into the dorms armed with shotguns and screamed,

“Every one face down on your rack and if you lift your head we’ll blow it off.”
The Governor then came onto the Main hall of the prison, took a photo as he seemed deep in discussion with his entourage.

Photo Op complete then he was on his way. Not one word to nor with a inmate.
Many can’t say if he really came or not.
With a shot gun to the head declaration, Bentley has negotiated a resolution to The Prisoners grievances- Lay down and if you keep lifting your head I’ll blow it off. That’s one way to deal with overcrowding. .. Alabama Justice for you.

A small group of protestors gathered at the prison and were forced into a small “free speech zone” here is their reportback:

“The Southern Alabama ‪#‎SPUSA‬ Members are at ‪#‎Holman‬ protesting the prison industrial complex. There are currently three state troopers, Governor Bentleys Security detail, and five standard correctional officers which greeted us at the correctional facilities entrance and made us relocate to a “Free Speech Zone”.

Holman Prison Update: Not long after our arrival State troopers, Local Law Enforcement, and Governor Bentleys security detail escorted the Governor out of the Holman Correctional Facility. Today the Governor visited Holman due to the two riots within the prison this week. Inmates on the inside have posted videos and have done interviews over the phone with local media saying the living conditions of the prison are unacceptable and overpopulation continues to be a huge problem. Video footage reveals mold within the prison, lack of hot water, and multiple inconsistencies within the facility. Other individuals have spoke of frequent racism and discrimination from the guards and some have stated “guards spitting on” inmates. After the Governors visit we expect a public statement in regards to his tour within holman prison and we EXPECT to hear solutions! The Southern Alabama SPUSA will continue to keep you updated as we learn more.
— Logan Holder

*note*
Sadly we were the only protesters present.