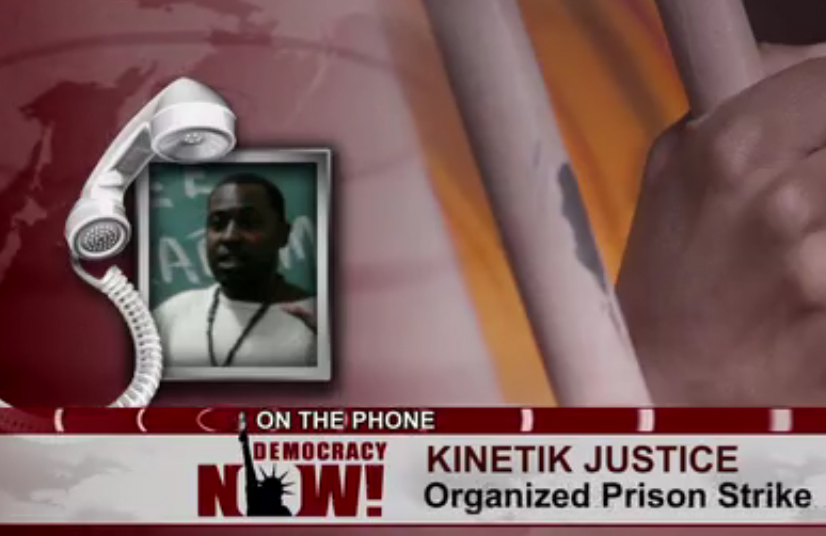 From DemocracyNow.org
Part 2 gets into broader organizing, including the Sept 9th Call for Nationally Coordinated Workstoppage and Protest.

We go behind bars to get an update on the end of a 10-day strike by Alabama prisoners to protest severe overcrowding, poor living conditions and the 13th Amendment of the U.S. Constitution, which bans slavery and servitude “except as a punishment for crime,” thus sanctioning the legality of forced, unpaid prison labor. “These strikes are our methods of challenging mass incarceration, as we understand the prison system is a continuation of the slave system, which is an economic system,” says Kinetik Justice, who joins us by phone from solitary confinement in Holman Correctional Facility. He is co-founder of the Free Alabama Movement and one of the organizers of the strike. He says organizers tried petitioning their conditions via the courts and lawmakers, but when they were unsuccessful, “we understood our incarceration was pretty much about our labor and the money that was being generated from the prison system, therefore we began organizing around our labor and used it as a means and a method to bring about reform in the Alabama prison system.”

Transcript:NERMEEN SHAIKH: We end today’s show in Alabama, where men at several prisons have ended a 10-day strike over unpaid labor and poor prison conditions. Their coordinated strike kicked off on May 1st, International Workers’ Day, when prisoners at the Holman and Elmore Correctional Facilities refused to report to their prison jobs—and later expanded to three other prisons. The strike focused on severe overcrowding, poor living conditions and the 13th Amendment of the U.S. Constitution, which bans slavery and servitude, quote, “except as a punishment for crime,” thus sanctioning the legality of forced, unpaid prison labor. Alabama operates the country’s most crowded prison system, holding nearly twice as many people as it’s designed to contain.

AMY GOODMAN: Organizers with the Free Alabama Movement say—a network of prison activists—officials retaliated against prisoners who participated in the work stoppage by leaving dorms in filth, not taking out trash, leaving showers and soiled laundry unclean. Organizers also say officials punished them by serving meals that are significantly smaller than usual, a practice they’ve referred to as “bird feeding.” Prison officials also responded by putting the facilities on lockdown, partially to allow guards to perform jobs normally carried out by prisoners.For more, we go directly inside the bars to Kinetik Justice. He joins us by phone from solitary confinement in Holman Correctional Facility, co-founder of the Free Alabama Movement, one of the organizers of the strike, currently serving his 28th month in solitary for organizing a similar action in 2014.

Welcome to Democracy Now!, Kinetik. You are in solitary confinement. Can you talk about this strike that you helped organize, from May 1st, and why you engaged in it, and what’s happened as a result?

KINETIC JUSTICE: Yes. Good morning, good morning. These strikes are our method for challenging mass incarceration. As we understand it, the prison system is a continuation of the slave system, and which in all entities is an economical system. Therefore, for the reform and changes that we’ve been fighting for in Alabama, we’ve tried petitioning through the courts. We’ve tried to get in touch with our legislators and so forth. And we haven’t had any recourse. Therefore, we understood that our incarceration was pretty much about our labor and the money that was being generated through the prison system, therefore we began organizing around our labor and used it as a means and a method in order to bring about reform in the Alabama prison system.

NERMEEN SHAIKH: Well, Kinetik Justice, could you talk about the new legislation that went into effect in Alabama in February, Senate Bill 67? What is that supposed to do for the conditions in these prisons in Alabama?

KINETIC JUSTICE: Actually, Senate Bill 67 is a means to try to address overcrowding in a piecemeal fashion. They did a lot of legislation that helps on the front end of those coming into the prison system now, but does nothing for those who have been backlogged in the prison system for decades.

AMY GOODMAN: Can you talk about how it is, Kinetik Justice, that you are speaking to us from inside solitary confinement, sort of redefining “cellphone”?

KINETIC JUSTICE: Actually, we are engaged in a struggle for our life, a freedom struggle, with the conditions and so forth. And in all means, a war, you know, warfare, you use what tools are available to you. And in this struggle for freedom, justice and equality, we’re doing just that. We’re using every tool available to us to get the maximized effect.

AMY GOODMAN: And can you explain what bird feeding is and the retaliation you feel that the prisoners face for engaging in this mass protest?

KINETIC JUSTICE: Yes, well, nutrition-wise, by the dietary requirements, each meal is supposed to be in regards to 1,800 to 2,200 calories. For the last 10 days, we have been receiving well below a thousand calories per meal.

NERMEEN SHAIKH: And, Kinetik Justice, you have talked about—we’ve talked a little bit about the prisoners’ demands, but you have some of your own. What do you want to happen?

KINETIC JUSTICE: Basically, I want an overhaul of the Alabama prison system—well, not even just the prison system, the criminal justice system, as there have been several exonerations lately in the state of Alabama which have prompted legislators to create an inquiry—an Innocence Inquiry Commission. So we’re pushing for transparency in the courts and humanity in the prison system, where we will actually have educational rehabilitation and re-entry preparedness, as well as we need an overhaul of the parole board, as our parole board is an arbitrary group of three men who make decisions based on paperwork. Actually, they never actually talk to the person who’s up for parole. So we just need an overhaul completely, from the courts, transparency in the courts, humanity and educational rehabilitation in the prison system, as well as a parole board that sets the criteria that lets a person know what’s required of him in order to make parole, rather than being set up three and five years based on the feelings of a parole board that never, ever sees you.

KINETIC JUSTICE: Well, in January 2014, in response to inhumane treatment and unsanitary living conditions, as well as the lack of educational rehabilitation, me and a couple of my comrades came together and put together what is called the Free Alabama Movement, which is a movement for the freedom, justice and equality of the over 30,000 people incarcerated in the state of Alabama. On January of 2014 at Holman, we began a coordinated work strike that spread to three other institutions. And as a result of that, I was just labeled as the leader and targeted as the leader of the Free Alabama Movement and declared a threat to the security of the Alabama Department of Corrections and placed in solitary confinement indefinitely.

AMY GOODMAN: We’re going to have to break to end the show, but we’re going to continue with you, as well as Pastor Kenneth Glasgow, founder and national president of The Ordinary People’s Society, a faith-based organization. We’re going to speak to him in Montgomery, outside of the bars. So we’ll post that online at democracynow.org. I want to thank you so much for being with us. Kinetik Justice, please stay on the line if you can. Kinetik Justice is co-founder of Free Alabama Movement, currently serving his 28th month—more than two years—in solitary confinement at William C. Holman Correctional Facility in Alabama, speaking to us from solitary confinement in prison.

That does it for our broadcast. We have job openings in our video news production fellowship and our internship program. Go to democracynow.org.

I’m headed to Washington, D.C., part of our 100-city tour. I’ll be at the Plymouth Congregational Church in Washington, D.C., tonight at 6:30. Then, Saturday, it’s on to Portland, Maine, then in the evening in Bangor on Saturday. On Sunday, I’ll be at College of the Atlantic in Bar Harbor at 11:00 in the morning. And then we’re on to Chicago on Monday and Tuesday, and Toronto at the end of the week. Check democracynow.org for details.

We continue our interview with an Alabama prisoner about the end of a 10-day strike to protest severe overcrowding, poor living conditions and the 13th Amendment of the U.S. Constitution, which bans slavery and servitude “except as a punishment for crime,” thus sanctioning the legality of forced, unpaid prison labor. We speak with Kinetik Justice, who joins us by phone from solitary confinement in Holman Correctional Facility and is co-founder of the Free Alabama Movement and one of the organizers of the strike, and with Pastor Kenneth Glasgow, founder and national president of The Ordinary People’s Society (TOPS), a faith-based organization focusing on criminal justice reform and rehabilitation of repeat offenders.