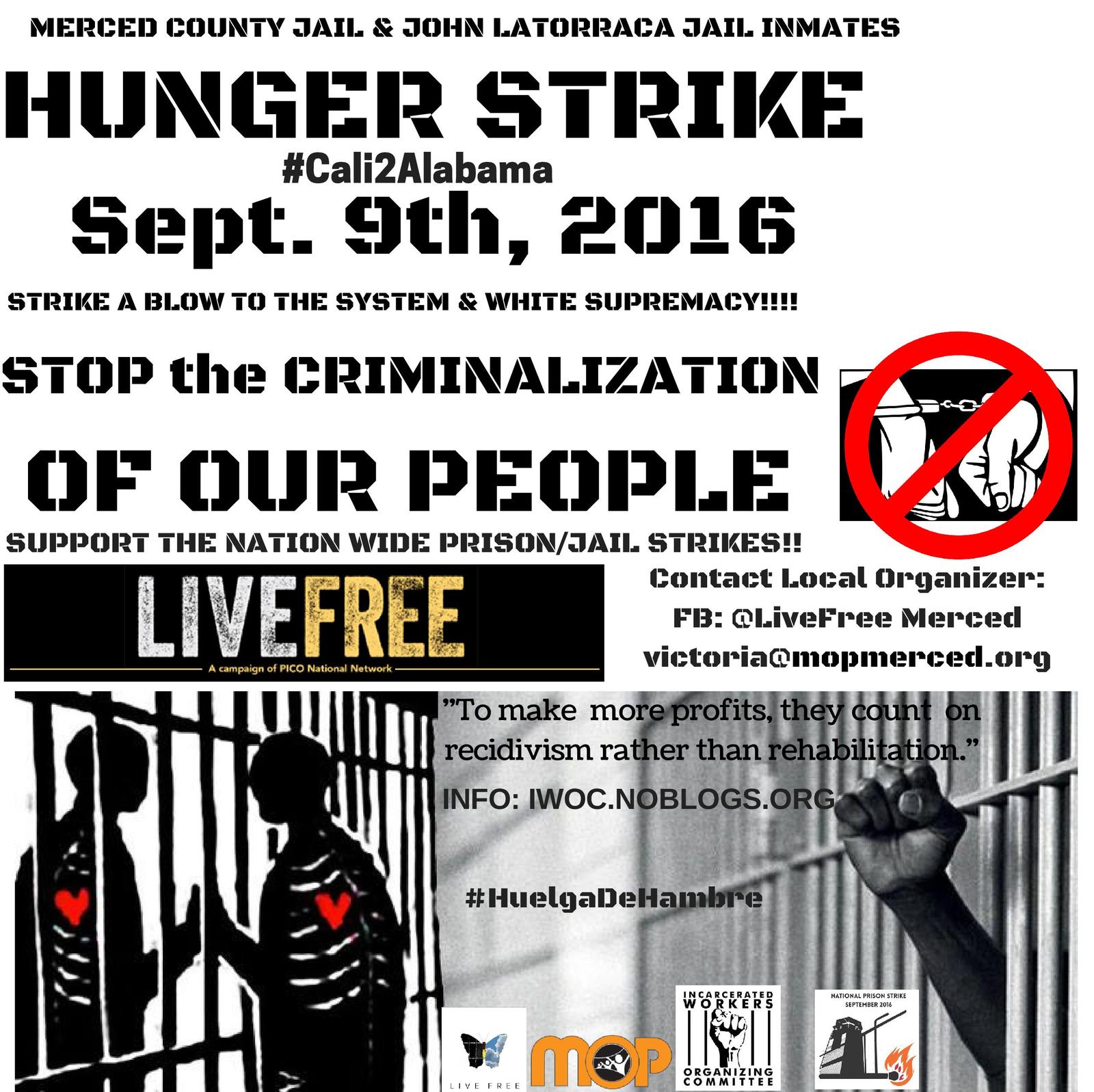 Immediate asks:
First and foremost we would like to advise you, that we as individuals on our own accord
have decided to invoke our First Amendment Right to assemble and have a peaceful
protest to address our grievances that go unanswered. We are in solidarity with the Nation &
World Wide Prison/Jail Strikes on the 45th anniversary of the Uprising of Attica Prison
and also want to expose our own local issues. For this we expect there not be any
repercussions or reprisals or any form of disciplinary actions taken during or after this
peaceful protest, which will be a hunger strike and refusal of all movements.

We believe that Lt. Moore will continue to harass us in attempt to stop our peaceful protest
because he does not want any outside officials nor agencies to become aware of his actions. In
the past when John Latorraca Jail inmates attempted to peacefully protest Lt. Moore came into
their dorm and took personal property, stripped them to only boxers (those were the only
garments they were left with), no sheets or blankets. He also took their phone and visiting
privileges so to stifle them from advising their family, loved ones, and counsel of what was
taking place. The facilities and staff have been known to allow these civil rights violations to
occur.

We are choosing to protest here in Merced County and John Latorraca Jails due to the
continued biased mistreatment including the misuse and abuse of authority within these facilities
as well as inmates and detainees not being afforded rights and entitlements ( see all attached
documents ).

The following issues we would like to be addressed immediately , the rest are as per adult
Title 15. We would like a plan of operations provided for us to show how this will be addressed:

2) Due Process­ We are unable to find relief via this course of action. Grievances either go
unanswered or are forwarded to the staff we have issues with. We are continuously
having our privileges taken without reports or notice for the ‘punishments’.  After
requesting and grieving or a 3+ year period for a Title 15 and recently received only 1
copy to circulate amongst 40 plus inmates.

3) S.N.Y. (Sensitive Needs Yard) inmates are given jobs to serve General Population
inmates: touching food, cleaning supplies, washing clothes, filling water buckets for yard.
Protective Custody & trustee inmates, even corrections staff have told us that are food,
clothing, water, chemicals are being contaminated with fecal matter, urine, blood or other
foreign material. S.N.Y. inmates should NOT have access to ANY items for the General Population or outside of their housing units. These are sensitive needs inmates and
should be segregated per S.T.G. classification rules. We want General Population put in
trustee quarters.

4) We are requesting to be taken out of green and whites stripes and placed in orange
(Main Jail) and blue (John Latorraca Jail). Furthermore we want to be racially integrated.
We are general population inmates yet we are segregated against our own will. When
we go to court we are discriminated against due to wearing the striped jail issued
uniforms by the court (Judges, bailiffs, etc.) in efforts to villainize us throughout court
proceedings. Classifications claims it has no relevance to the court process but the first
thing brought up throughout court proceedings is the fact we are housed on an ‘active
Norteno’ block(s). We have NO problems being with other group segments, in fact we
hope to prove this would ease the burdens of our families and over criminalization we
face when we are labeled this way.

5) We are not being provided with the proper tools to maintain a healthy, sanitary, clean
living environment. I.e. our brooms do not work. We are given water but are told it is
soprox. We are supposed to receive deodorizer, disinfectant, and sanitizer and are not.
After dinner trays we do not receive cleaning supplies so our tiers remain unsanitized.

6) We have no exercise equipment.

7) We are asking for Mail system oversight. Inmate mail is continuously missing,
intercepted or not received both outgoing/incoming, legal/familial.

9) Access to Inmate Welfare fund for the most indigent people incarcerated. Due to the
segregated housing of inmates at the Merced County Jail on Blocks 1 & 3 and John
Latorraca Jail dorms 501 & 502 we are unable to benefit from services or relief.

10) Lt. Moore: FIRED, demoted or removed from working within the jail facilities. Cease and
desist his continued harassment and abusive treatment of inmates. The environment
with which Lt. Moore has created is hostile and dangerous for both corrections staff and
inmates. He also authorized the raid in item #11.

11) Review of the cellblock raid and inmate injuries on 6/30/2016. Make available videos
public and ensure an independent investigation of the use of force upon inmates during
this event and more scrutiny to prevent future inmate death or injuries.
12) Medical services need to be adequate and managed by unbiased staff. Current medical
contract with California Forensic Medical Group with Program Manager/R.N. Amanda
Gibson­ Sheriff Corrections Lt. Gibson’s wife. Asking for her transfer or termination.

13) Administration over Trinity Services Group, Inc. which oversees commissary and food.
Currently being oversaw by Sheriff Corrections Sgt. Berber’s wife. Inmates are asking for
fair pricing and that products are not missing portions of items purchased per Penal
Code §4025.

15) Inmates are requesting Ricardo Herrera d.o.b. 12/22/1982 be placed into his regular
housing unit. He was removed against his will after the raid of Block 4 6/30/2016. He has
made claims against the County of Merced heard on 7/12/2016 Merced County Board of
Supervisors meeting item #26 on agenda and has been forcefully housed in a 1 man
cell, which is considered solitary confinement.

§1045 Public Information Plan
Each facility administrator of Type l, ll. ll, lV facility shall develop written policies and procedures
for the dissemination of information to the public to other government agencies, and to the news
media. The public and inmates shall have available for review the following material:
(a) The Board of the State Community Corrections Minimum Standards for Local Detention
Facilities as found in the Title 15 of the California Code of Regulations.
(b) Facility rules and procedures affecting inmates as specified in sections (1) §1045 Public
Information Plan
(2) 1061, Inmate education Plan
(3) 1062, Visiting
(4) 1063 Correspondence
(5) 1064 Library Service
(6) 1065, Exercise and Recreation
(7) 1066, Books, Newspaper, Periodicals, and Writings
(8) 1067, Telephone Access (in accordance)
(9) 1068, Access to Courts & Counsel
(10) 1069, Inmate Orientation
(11) 1070, Individual/Family Service Plans
(12) 1071, Voting
(13) 1072, Religious Observance
(14) 1073, Inmate Grievance Procedure
(15) 1080, Rules & Disciplinary Penalties
(16) 1081, Plan of Inmate Discipline
(18) 1083, Limitations on Discipline
(19) Responsibility for Health Care Services

§1241. Minimum Diet
(a) Protein group include beef, veal, lamb, pork, fish, eggs, cooked dry beans, peas, lentils,
nuts, peanut butter, and textured vegetable protein. (TVP). One serving equals (14)
grams or more of protein; the daily requirements shall be equal to three servings ( a total
of 42 grams per day or 294 grams per week). In addition, There shall be a requirement
to serve a fourth serving of legumes three days a week. See (b) (c)(d)
Providing only the minimum servings outlined in the regulations is not sufficient to meet the
inmates calorie requirements. Additional servings from the dairy, vegetable, fruit, and bread
cereal groups must be provided in amounts to meet calorie requirement. In keeping chronic
disease prevention goals, total dietary fat should not exceed 30% percent of total calories on a
weekly basis. Fats shall be added only in minimum amount necessary to make a diet palatable.
Note: Authority cited 6024 and 6030 Reference Penal Code.

§1246. Policies and procedures shall be developed and implemented to ensure to ensure the
appropriate work assignments are made and food handlers are adequately supervised. Food
shall be prepared and served only under the immediate supervision of a staff member.

A Pre­Trial Detainee is to be treated with the same basic rights/Freedoms as a free­person. We
are held at such high bail amounts that many of us are unable to make bond. In Merced County
Jail detainees are treated as though they are already sentenced. They do not afford us basic
dignities, rights, or Freedoms. They state, “Jail is not a place to be comfortable and if you want
to be comfortable you need to stay out of trouble.” This clearly shows  by the attitude and
treatment towards detainees by Sheriff Corrections staff, officers, coroner, and medical
personnel. We are viewed and treated  as guilty during our confinement.

All inmates detained and housed in green and white striped are continuously being
discriminated against and harassed. We have been raided on several occasions which resulted
in inmate injuries. We are not given the opportunity to benefit from services such as Behavioral
Intervention Program, Anger management, A.A., N.A., Early Release, Alternative sentencing
programs, jobs, etc. Many of us have been labeled or classified due to familial relations. known
association or the area where we reside as gang members. The facilities claim that as such we
are not entitled to any form of rehabilitation although other persons with known gang activities
are.

Upon arriving to Merced County Jail inmates are booked and classifications (Merced Police
Dept., Gang Violence Suppression Unit, Sheriff’s Dept., District Attorney’s) are conspiring to
systematically segregate and label anyone they feel are gang members. After being booked for
clearance purposes inmates are taken to classifications for interview and are asked if they have
any affiliations or housing issues. No matter what you say they will house they see fit. If you say
you are General Population and wish to be house with G.P., they will say you are an ‘associate’
of certain people or groups in order to classify you as a gang member. Unless you choose to
become an informant, debrief (give information), or go to protective custody. Why? Because we
are put in specific clothing (stripes) so that our charges can be enhanced via gang
enhancements and we are treated with bias throughout our detainment and court proceedings.
We want to be integrated with other General Population inmates but classifications will not allow
it in their efforts to use our housing to establish p.c. 186.22 charges. These interviews are NOT
recorded and that needs to change due to the inmates word not being found credible, so
classifications can make up anything they want ruining families and lives. (S.T.G.) Racial
integration.

We have no law library access. Per title 15 we are entitled to law library to assist us with our
on­going case(s), as well as to stop the misuse and abuse of authority within the facilities. The
jails claim unless inmates are Pro­Per they can not have access making it extremely difficult  to
properly file motions or Writs of habeas corpus to address matters to the court in legal form.