Prisoners are going on strike against prison slavery on September 9, 2016. Help support their organizing, and hear their story. Subscribe to the Incarcerated Worker, a mini-magazine written and edited by prisoners. Subscriptions  are $20/year, and all proceeds go to supporting prisoner organizing.

Can you swing a bit more for prisoner resistance?

Sponsor union membership for a prisoner for $5/month or $60/year.

We encourage union locals and community groups to sponsor membership for incarcerated workers in prisons in your area. If you’re interested in finding ways to support the resistance against prison slavery, get in touch!

Donate to support the long term organizing work of IWOC.

When the 13th Amendment was passed in 1865, it in theory banned slavery, except in the form of imprisonment. After the civil war, many former slaves were forced into becoming indentured share croppers, while others were imprisoned for minor offenses and were forced to work for free in the fields. Over the decades, corporations and governments continued to look towards prisons as a major source for free and cheap labor. Today, prison labor generates billions in profits for fossil fuel and energy corporate giants, fast food companies, banks, and other industries, who all grow rich from prison slaves.

In the past several years, a movement has grown from the inside out to fight against prison slavery. This struggle has taken many forms, from hunger and work strikes, to full fledged revolts, to mass organizing drives and the creation of publications and study groups.

IWOC is part of this movement – to abolish prisons and the slavery they run on in the United States and worldwide and seeks to be a springboard of information and action between those on the inside and those on the outside.

On September 9th, over 50 cities will take to the streets to support the prison strike as prisoners on the inside will lay down their tools.

In order to continue and expand our work as IWOC however, we need your help. We need to raise upwards of $10,000 to expand IWOC and continue to engage in mass organizing. With this money we will:

1.) Carry out mass mailings to our over 800 IWW members on the inside to update them on the strike, our union, and ongoing prison struggles. This is one of our major costs and we hope to secure funding for our outreach publication, The Incarcerated Worker, for the coming period.

2.) Create outreach materials for those on the inside and the outside.

3.) Help cover costs of organizers putting in long hours behind the scenes to accomplish these tasks and support those taking risks behind bars.

4.) Provide legal and other support for prisoners as much as possible that are going to be legally taking part in the strike. We can’t help everyone, but with more resources, we can certainly increase the amount of solidarity that we do offer.

This strike is a blow against white supremacy and prison slavery. We hope that you can be apart of it, in whatever capacity. Stand with us. Stand together. Until all the prisons fall. 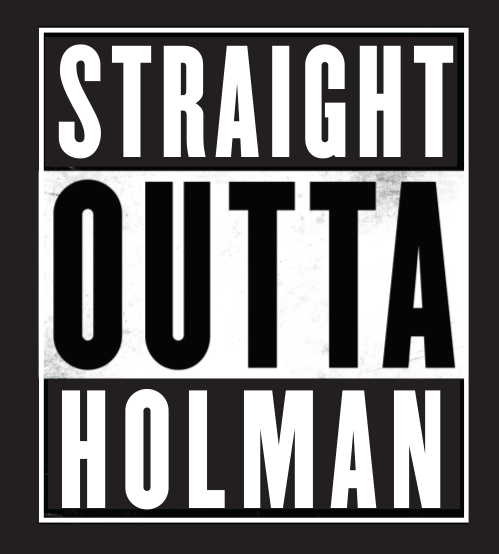 In celebration of the wave of resistance going down and about to go down, and as a tool to help raise money and highlight the rebellion of folks down in ‘Bama, a comrade has made this “Straight Outta Holman” shirt design. The idea came up in conversation with a prisoner at Holman, and went from there.

As you can see, the front features the “Straight Outta Holman” logo, and the back has a chronology of resistance at Holman Prison.

Send us an email at prisonerresistance@gmail.com and specify sizes to order shirts.

Individual shirts will be $15 apiece, which should include shipping. If you would like to order bulk and re-sell these shirts at events, order more than 10 and you’ll only be charged $5. Any profits from selling the shirts should go to Free Alabama Movement through PayPal at famfamalabama@gmail.com. 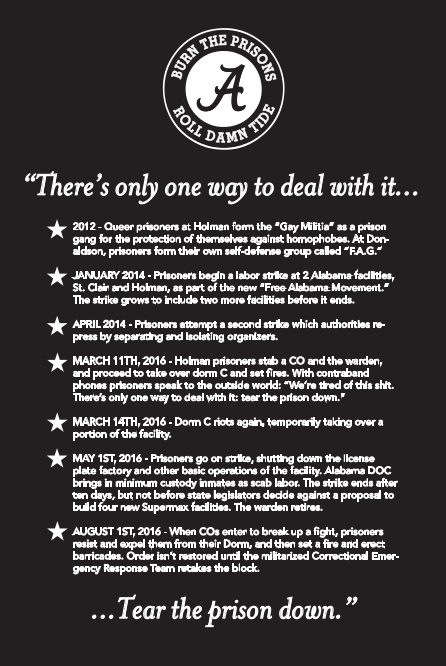