Before the strike I was able to speak to prisoner leaders including Melvin Ray, James Pleasant and Robert Earl Council, all of whom led work stoppages in Alabama prisons in January 2014 as part of the Free Alabama Movement, as well as Siddique Hasan, one of five leaders of the April 1993 uprising at the Southern Ohio Correctional Facility at Lucasville, Ohio. (The Ohio revolt saw prisoners take control of the facility for 11 days after numerous grievances, including complaints about deaths allegedly caused by beatings from guards, went unanswered.) Now, authorities have cut off the access of these and other prisoner leaders to the press and the rest of the outside world. I have not been able to communicate with the four men since the strike began. END_OF_DOCUMENT_TOKEN_TO_BE_REPLACED

“I’m getting kind of mentally exhausted. How am I going to deal with this nonsense?” Hasan said. “I’m not going to throw in the towel. I just remain in the trenches.” END_OF_DOCUMENT_TOKEN_TO_BE_REPLACED 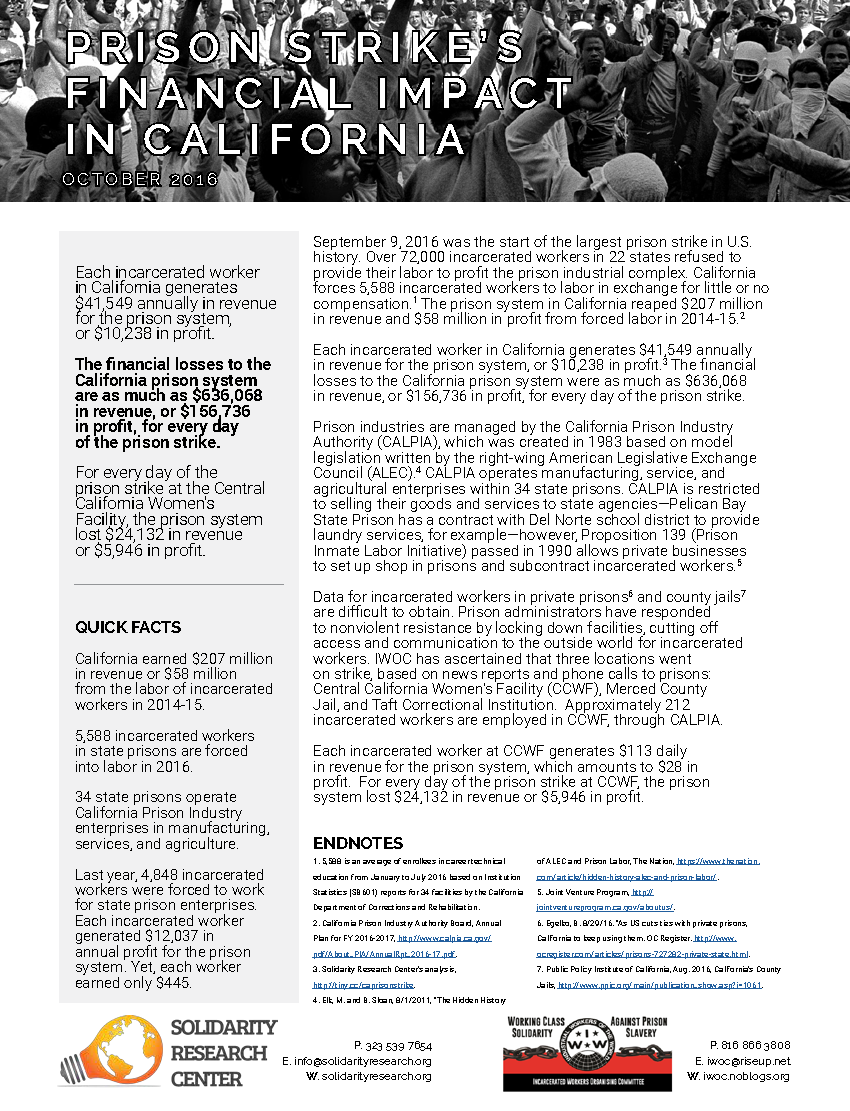 September 9, 2016 was the start of the largest prison strike in U.S. history. Over 72,000 incarcerated workers in 22 states refused to provide their labor to profit the prison industrial complex. California forces 5,588 incarcerated workers to labor in exchange for little or no compensation. The financial losses to the California prison system are as much as $636,068 in revenue or $156,736 in profit for every day of the prison strike.

FREE ALABAMA MOVEMENT (F.A.M.) is pleased with the news that the U.S. Department of Justice (D.O.J.) will be conducting a statewide investigation into the issues of abuse, violence and safe, secure and sanitary conditions in Alabama’s men’s prisons, even though we believe that the women’s prison should also be revisited. We would like to emphasize that we are looking for an open, transparent and inclusive investigation that will keep the public updated, informed and INVOLVED throughout this process. Alabama prisons are unique in that they are the most overcrowded, underfunded, and understaffed prisons in America. Therefore, any solutions to the existing problems will need to be unique and require “outside-of-the-box” thinking as well. END_OF_DOCUMENT_TOKEN_TO_BE_REPLACED 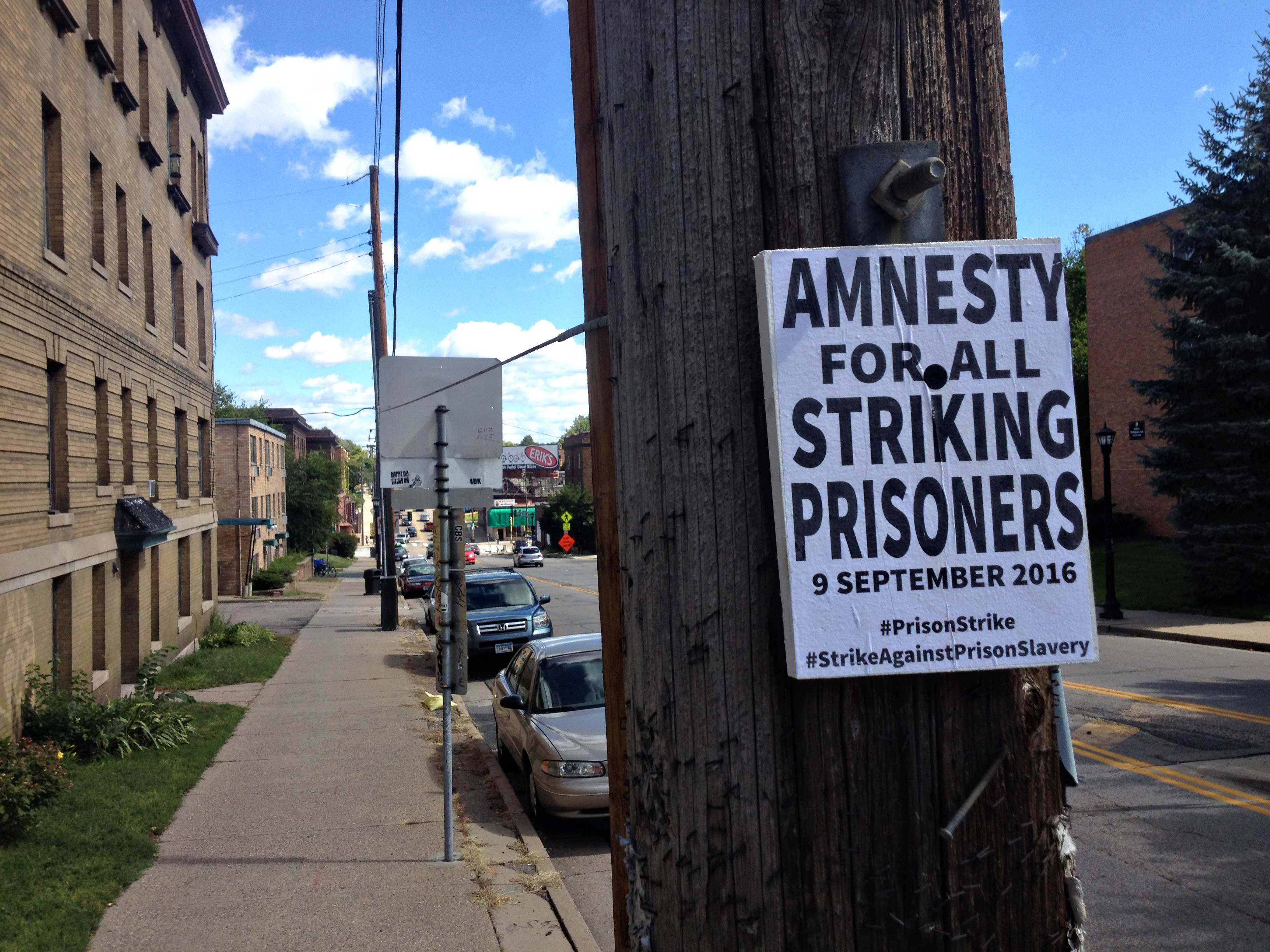 From Cowboys on the Commons

An update, and interviews with some inmates, on tomorrow’s prison protest events.

Tomorrow, September 9, inmates in prisons from California to Alabama will rise in protest and civil disobedience against the inhumane conditions, underpaid labor, and socioeconomic oppression of the American prison system. Activists in states from Washington to New York, Michigan to Texas, will gather in solidarity with those prisoners. As I wrote in an article published yesterday at Occupy.com, this is a strike against American corporate capitalism itself, because the prison is the “ideological muscularity” of economic injustice. Punitive incarceration (as opposed to the detention of unstable and dangerous individuals) is a policy farce, which even intelligent conservative legal theorists are hesitant to defend. But what happens in American prisons is even worse–American policymakers have accepted the inevitability of micro-violence, an entire paradigm of inmates’ loss of agency over their bodies, behind prison walls. Even most of the international human rights community reluctantly accepts the inevitability of compulsory labor as part of imprisonment. But radical egalitarian thinking does not, and the politics of 2015-2016 have brought egalitarianism onto a bigger stage.

The events have been in planning and promotion stages for several weeks now, but apart from a fine article in The Nation that also ran yesterday, national media coverage has been lacking. The protest at Standing Rock — a stand by Native Americans and allies against the economic interests that run over indigenous land — have also overshadowed other activist news, and it’s worth noting that the protests there are connected with prison resistance at the deepest levels. The extraction-exploitation economy uses the cheapest human labor it can find, and fights to dig energy out from all land, no matter how sacred to those connected to that land. Dig stuff up, throw people in prison, keep planet and people in a state of dependence and desperation. END_OF_DOCUMENT_TOKEN_TO_BE_REPLACED

his is the second installment of a two-part series about the upcoming September 9 prison labor strike. Read the first part here.

“Maximum utilization of the U.S. prison system as a weapon of class warfare was part of the neoconservative agenda initiated during the Reagan administration. As the keynote speaker to the 1981 convention of the American Correctional Association … Associate Attorney General Rudolph Giuliani articulated the new policy in classical conservative terms. ‘In the beginning,’ he said, ‘man formed government to protect against the danger of invaders from without as well as predators from within. National defense and domestic defense are, therefore, the two primal functions of any government. Our criminal justice system is charged with one of these two primal tasks.’ No subsequent administration, including that of Democratic President Bill Clinton, has deviated from the prison policies established during the early 1980s.” – [Richard D. Vogel](http://monthlyreview.org/2003/09/01/capitalism-and-incarceration-revisited/)

In the video, recorded and distributed via an unauthorized cell phone, a man speaks from a corner of cinderblock walls, pointing to a pile of hideous-looking meat patties. He’s hard to hear because of the noise of people and the recording quality.

He uses a piece of metal to pick the meat apart, displaying pink and gray uncooked substances. There are obviously huge chunks of raw and dirty meat in the patties, which are burnt on one side, undercooked on the other, and a nauseating color in the middle. Finally, the prisoner faces the camera phone and explains that prisons save money by feeding spoiled food to inmates, that this is part of the cost-benefit calculus of the prison system.
END_OF_DOCUMENT_TOKEN_TO_BE_REPLACED

As we build momentum towards the September 9th national prison strike, we want to reflect on lessons learned from past generations of prison rebels, as well as how we can maintain energy on September 10th and beyond. In Episode 50 of the Ex-Worker, solidarity organizer Ben Turk fills us in on some history of prisoner organizing in recent decades, recaps some of the solidarity actions that have taken place leading up to this year’s historic strike, and offers perspective on continuing and deepening our resistance to prison society. We commemorate the death of Jordan MacTaggart, an American anarchist killed on the front lines in battle with the YPG against the Islamic State, and discuss international solidarity and the politics of martyrdom with Rojava Solidarity NYC. The death of John Timoney, former police chief and notorious foe of anarchists, prompts both glee and a somber reflection on the misery he inflicted on us. A member of Revolutionary Anarchist Action (DAF) in Istanbul discusses the background to the recent failed military coup as well as recent waves of anti-anarchist repression. A call for solidarity from la ZAD, news, events, and prisoner birthdays round out this packed episode.

Organizing groups say coordinated strikes are under way in at least four states in stance against poor sanitary conditions and jobs that amount to forced labor.

A nationwide prison strike over conditions and wages behind bars, which organizers tipped to be the biggest of its kind in US history, was under way in at least several correctional facilities across the country on Friday, according to prison rights advocates.

Inmates from several states, who had bound together with the help of activists and organizing groups, aimed the national strikes – which had been in the making for several months – against what they said amounted to slave labor conditions amid mass incarceration in the country.

The coordinated events, which organizers targeted in as many as 24 states, occurred on the 45th anniversary of the riots at Attica prison in New York – the largest prison uprising in American history – over grievances today’s protesters say are similar, including poor sanitary conditions and prison jobs that amount to forced labor.

In April, one of the main national groups organizing the campaign, the Incarcerated Workers Organizing Committee (IWOC), under the banner of the Industrial Workers of the World (IWW) union, announced its call to action. END_OF_DOCUMENT_TOKEN_TO_BE_REPLACED

Prisons can’t run without inmates, in more ways than one. Prisoners wash floors, work in the laundries and kitchens, and provide a large amount of the labor that keeps their facilities running. In return, they earn pennies per hour or even no pay at all.

That’s sparking what may be the largest prison strike yet as inmates across the country plan to stop working on Friday. The strikers are calling for an end to forced labor and what they call “prison slavery.”

It’s no coincidence that they picked Sept. 9 as the strike date: It’s the 45th anniversary of the Attica riot, when prisoners at the Attica Correctional Facility in New York rioted for better conditions.

The strike comes amid increased interest from lawmakers and the public in prison reform, as well as several nonviolent prison protests designed to draw attention to labor conditions, such as a 2014 work stoppage in Alabama prisons. The organizers frame the issue as slave labor because the 13th Amendment, which outlawed slavery in 1865, includes one exception: for people who are “duly convicted” of a crime.

“That’s why none of these protections, such as worker protections, apply to prisoners,” said Alex Friedmann, the managing editor of Prison Legal News and the associate director of the Human Rights Defense Center. “So under the 13th Amendment, they’re basically worked as slaves, and if they don’t work, they’re punished.” END_OF_DOCUMENT_TOKEN_TO_BE_REPLACED