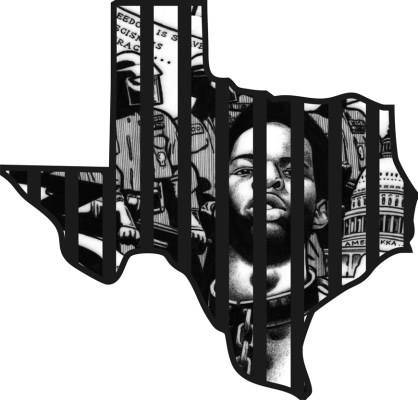 Eric Bergstrom and several other inmates at the Estelle Unit in Huntsville, TX are facing severe retaliation after demanding their basic human rights be met. Estelle is especially notorious for their excessive use of physical violence against inmates. Currently, the Prison Justice League has an open case against them. Read the report here: http://prisonjusticeleague.org/wp-content/uploads/2014/04/Cruel-Usual-Punishment-PJL-Final.pdf

Eric’s wife wrote to us, detailing this specific incident.

On April 27th, work was called off due to heavy rains and the field bosses came in to shake down the wing. The inmates starting voicing their concerns and talking about how they were the next unit to go on a worker’s strike*. The inmates were forcibly extracted from their cells, tear gased, and one man was nearly beaten to death by a guard. According to his wife, the senior Warden, Tony O’Hare came to their wing to supervise the situation. She states “Eric spoke about getting their good time, unsafe working and living conditions, and the other fact that other states pay their workers and that all that had happened that day was partially his fault because he was not there for all of it. Eric was then singled out from everyone to either become a martyr or to be used as an example by the warden. He was pulled from the cell the warden hit him in his knees with a baton, which was documented by medical, then Eric was given disciplinary charges, for ‘inciting a riot’ all his property was confiscated”

Currently they are continuing their retaliation by denying communication between Eric and his wife and daughter. Others involved in the incident have faced similar consequences. We urge you to contact TDCJ to tell them their actions are atrocious and we won’t back down until communication is allowed between inmates and their families.

Basic script, please modify this to be in your own words if you can. Also, EMAILING would be great too. The more paperwork that has to be filled out, the higher chances we have of making an impact.Script

“Hi I’m [calling/emailing] in regards to Eric Bergstrom, TDCJ #1258725 and other inmates facing retaliation for demanding their basic human rights. On April 27th, inmates on the K-wing at the Estelle Unit were tear gased and brutalized by guards for vocalizing their concerns about inhumane treatment. Eric and other inmates involved in the incident have been cut off from communicating with their families. I’m contacting you to urge you to hold the guards and Warden Tony O’Hare accountable for their actions, as well as allow communication between inmates and their loved ones immediately.”