A prison disturbance Tuesday that required the firing of a warning shot to quell it followed a change in mealtime procedures at the Nebraska State Penitentiary.

The change restricted the number of inmates who could eat in the dining hall at any given time and went into effect at the evening meal on Tuesday. Afterward, some inmates ignored multiple orders to return to their housing unit.

Groups of inmates throughout the prison then became defiant and verbally aggressive, according to a Corrections Department press release. After a group of inmates gathered and converged on staff, a warning shot was fired from a tower.

END_OF_DOCUMENT_TOKEN_TO_BE_REPLACED

from The Final Straw on Asheville FM

This week we spoke with Alex about Bend the Bars conference which is taking place in Columbus OH on the weekend of August 26th-29th. This is a gathering which was called for in direct support for the September 9th national prisoner work strike, and is one of the only gatherings that we know of which explicitly centers the work of people doing direct support with incarcerated folks as opposed to NGOs and non profits. In this conversation we speak about the intentions for the conference as well touching on the prison condition in the US, the National Work Strike, and many other things.

You can learn more about this event by visiting https://bendthebars.noblogs.org/, and you can RSVP to this event or correspond with the organizers by emailing bendthebars@riseup.net

And, to visit the news sources that our guest mentioned, and to learn more about the upcoming national prisoner work strike to be called on September 9th, you can visit the following websites:
Free Alabama Movement
Support Prisoner Resistance
IWOC
Additionally there is Prison Legal News, which is a resource for folks who want more information about the day to day litigation that affects convicts and their families.

Hunger strikes by some state prisoners protesting abuses of solitary confinement at the Waupun Correctional Institute are reportedly spreading to two other state prisons, according to prisoners’ rights advocates.

The Coalition of Prisoner Supporters has also received reports of dozens of hunger strikers at Columbia Correctional Institution, according to a letter from prisoner Robert Ward.  The Wisconsin Department of Corrections has refused to release the number of prisoners involved in the hunger strikes at any of the state prisons.

The so-called “Dying to Live” hunger strikes are an attempt by prisoners to abolish long term solitary confinement in Wisconsin, according to Coalition member Ben Turk of the Milwaukee Industrial Workers of the World. LaRon McKinley-Bey and Ras Uhuru Mutawakkil (state name Norman Green) have drafted a proposal of new rules for DOC’s use of solitary confinement. These rules were delivered to the DOC along with a rally and protest by 20 members of the Coalition of Prisoner Supporters on July 5  at WI DOC central office, according to Turk. END_OF_DOCUMENT_TOKEN_TO_BE_REPLACED

Chance Zombor, 36, leads a protest against the practice of solitary confinement at a rally in Madison Tuesday. Zombor has spent time in isolation at Waupun and Oshkosh correctional institutions. About 30 people marched to the Wisconsin Department of Corrections headquarters to deliver a letter arguing against the use of solitary confinement in Wisconsin prisons. Along the way they shouted “Our passion for freedom is stronger than their prisons!”

END_OF_DOCUMENT_TOKEN_TO_BE_REPLACED

Mother Jones has published an extensive expose on the Corrections Corporation of America in which investigative reporter Shane Bauer gets himself hired by CCA to expose the company and the problem of private prisons.

PHOENIX (CN) — Inmates of an Arizona prison claim a specialized tactical unit of corrections officers rounded up nearly 55 prisoners outside in 100-degree weather and assaulted those who questioned their actions.

According to the complaint, about 40 to 45 TSU officers ordered nearly 55 inmates in the Cook Unit at the Eyman prison complex in Florence, Ariz., out of their cells for a “quarterly search” on June 9 and 10, 2014.

The officers allegedly ordered inmates to stand in a single-file line outside in the sun, where it was more than 100 degrees, in their underwear, T-shirts and shower sandals. END_OF_DOCUMENT_TOKEN_TO_BE_REPLACED 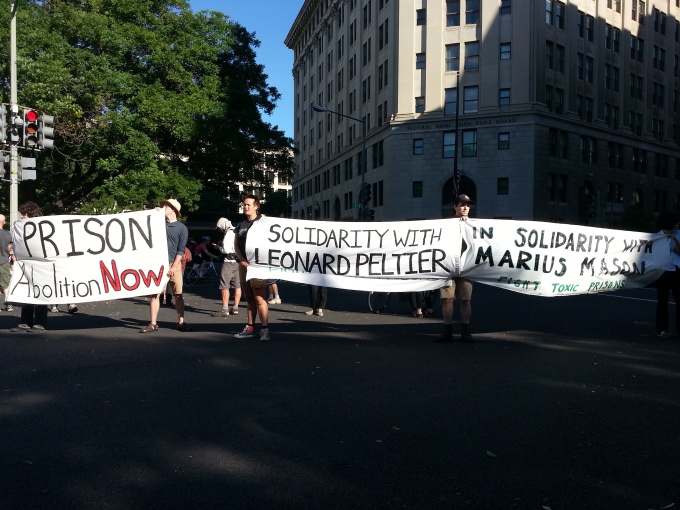 Report back from FTP Convergence Day of Action

from Campaign to Fight Toxic Prisons

Over the weekend of June 11th an incredible array of folks gathered in Washington, DC for the Convergence to Fight Toxic Prisons anwd Support Eco-prisoners. After two days of networking, strategizing and listening to the wisdom of black liberation fighters like Ramona Africa and Jihad Abdulmumit as well as former eco-prisoners like Eric McDavid and Daniel McGowan – and so many more, folks hit the streets the morning of June 13th to raise some hell in the belly of the beast.

The Fight Toxic Prisons march got started bright and early to make sure that the prison pushers at the BOP did not get off to a good workday. Chanting “Burn prisons, not coal” and “Break the locks, no more cops!” about 50 people shut down the intersection in front of the BOP and blocked the entrance to their parking garage, preventing workers from getting in. After holding the space for an hour, and hearing some inspiring words from folks like Linda Shosie, a mother whose son is stuck inside a highly toxic prison, the march moved on to the Dept. of Justice and FBI headquarters which sit across the street from each other. END_OF_DOCUMENT_TOKEN_TO_BE_REPLACED

So far this year, prisoners have been doing just that. END_OF_DOCUMENT_TOKEN_TO_BE_REPLACED